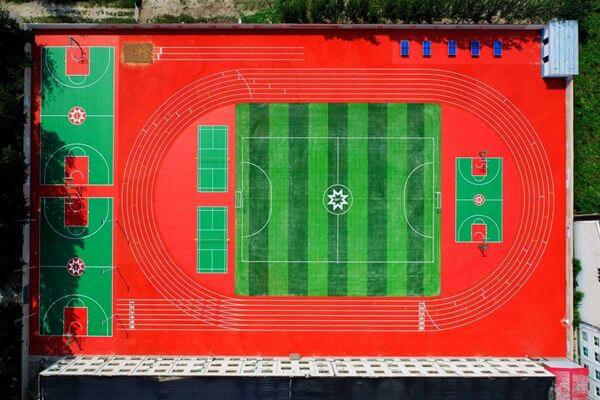 Shoppers can return their old Nike sneakers in person at the brand’s flagship store in Shanghai or arrange an at-home pick-up with Alibaba Group’s logistics service .

The donated shoes are disassembled and re-processed into building materials to construct rubber-based sports courts at schools across the country.

“The private sector needs to encourage more environmental-friendly actions among consumers while committing themselves to reduce carbon emission in their business operations,” Cheng Jiang, General Manager of the Social Good Department at , said in a statement last week.

Participating users will receive virtual “green energy points” on Alipay’s program, representing real trees planted by the platform and its partners on behalf of consumers.

Shoppers may also find themselves walking on one of the 15 sports courts built by Nike to date using materials recycled from donated shoes. The brand aims to complete an additional 85 by 2030.

“This brings out intuitive changes. People can see their efforts transformed into actual results. The sense of participation is stronger,” said Lin Xu, Senior Director of Social and Community Impact at Nike Greater China, in a written statement in Mandarin.

The Ant Forest initiative, launched in 2016, encourages consumers to participate in low-carbon activities.

Over 650 million shoppers are part of the program, and more than 400 million trees have been planted as of August 2022, saving roughly 26 million tons of carbon emissions in the process, according to Ant Group estimates.

“Recycling sneakers can reduce carbon emissions by 62.48%, compared to the traditional way of disposing of the worn shoes that ended up in landfill or incinerators,” Lin added.