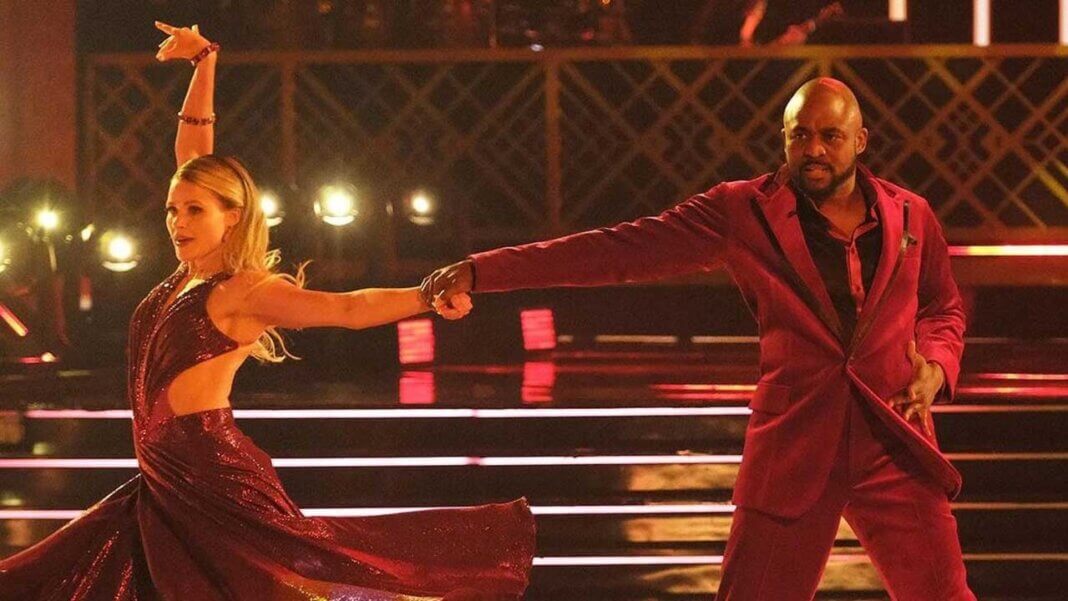 Dancing With the Stars has brought six couples to the semifinals, and some of the couples are leaving everything on the dance floor in an effort to make it to the finale.

Tyra Banks and co-host Alfonso Ribeiro embraced the fun of the evening, as they oversaw the outspoken panel of judges, including Carrie Ann Inaba, Len Goodman, Derek Hough and Bruno Tonioli, who weighed in on all the night’s dances.

Each of the remaining couples had to take on two full routines this time around, meaning less rehearsal time for everyone all around. However, for a few, that didn’t prove to be a problem. However, along with double dances, the night also featured a double elimination!

Here’s a look at the best dances of the night! Scroll to the bottom to see which two couples ended up getting the axe!

Charli hit the floor with fire in her eyes and angelic passion in her moves and may have scored the win for the whole season with this dance alone.

Song: “Glimpse of Us” by Joji

Judges’ Feedback: “That was perfection on top of perfection and so open,” Carrie Ann marveled. “That was beyond spectacular and I just want to thank you.”

“That was so good it literally took my breath away,” Len said in awe. “No words of mine can sum up how good I thought that was.”

Derek said Charli is the “first contestant to really look like a ballroom dancer.”

“You danced like an angel,” Bruno praised. “This performance will go down in history as one of the best we’ve seen on this show.”

Dancing to a love song, in a style devoted to love and lovers, was particularly difficult for Gabby this week, considering her recent high-profile split. However, she managed to channel that into something magical.

Song: “I’m Kissing You” by Des’ree

Judges’ Feedback: Derek called the dance “flawless” while Bruno said she looked like she “stepped out of a dream.”

“I felt like you stripped down some walls in this dance, and it was really beautiful,” Carrie Ann shared. “It was very real and vulnerable, it was a really human and wonderfully danced waltz.”

After delivering a great but not flawlessly scored 1st dance, Wayne tapped into some deep emotions for his ballroom dance number, and dedicated the routine to his late grandmother. The dance was deeply moving and Wayne’s tearful remembrance of his grandmother really tugged at the heartstrings.

Judges’ Feedback: “As always, you come out and you give it everything you’ve got, 100 percent,” Len shared.

“You are so fantastic to watch and it’s always such a joy. So thank you for that,” Derek praised.

There’s just no stopping Charli when it comes to bringing brilliance to the ballroom. The pair delivered a wildly powerful paso doble their Latin dance number, and just floored the judges with their second utterly flawless routine of the night.

Judges’ Feedback: Carrie Ann felt the need to walk over and hug Charli and Mark, and call their dance “beyond perfection.”

“I’m telling you, that was fantastic,” Len said, struggling to find the right words.

“That routine was absolutely iconic,” Derek shared, while Bruno said their dance was “a triumph.”

The Bachelorette star brought the heat with her second routine, and Val made sure to strip his shirt off, to bring America the fieriest routine of not just the night but the entire season.

Judges’ Feedback: “This semifinal is off the charts!” Carrie Ann declared. “I’ve never seen you dance with so much intensity!”

“To be able to dance with that much control at that speed was just fantastic,” Len praised.

This week’s episode included two big reveals — one super adorable and the other somewhat bittersweet.

First, Witney Carson revealed that she’s expecting baby no. 2! It was an adorable way to share the news with her fans, and just made everyone smile.

Then between the first and second rounds of the night, Len announced that this will be his last season as a judge on Dancing With the Stars. The longtime judge said he wants to spend his days back home in England with his grandchildren, and he earned a long, enthusiastic standing ovation from the crowd.

Tonight’s goodbyes were twice as hard as nights past because the semifinals once again ended in a difficult double elimination.

It all came down to the final three — Trevor Donovan and Emma Slater, Daniel Durant and Britt Stewart, as well as Shangela and Gleb Savchenko. It was revealed that the couple with the lowest scores in total would be instantly eliminated, and not eligible to be saved by the judges. That couple wound up being Trevor and Emma.

This meant the judges had to choose between Daniel and Britt, and Shangela and Gleb. It seemed to be an agonizing vote for the judges, but it was a unanimous decision to save Shangela and eliminate Daniel.

The Dancing With the Stars season finale kicks off next Monday at 8 p.m. ET/5 p.m. PT on Disney+.