How ‘The Woks of Life’ Forever Shaped Chinese Cooking in America 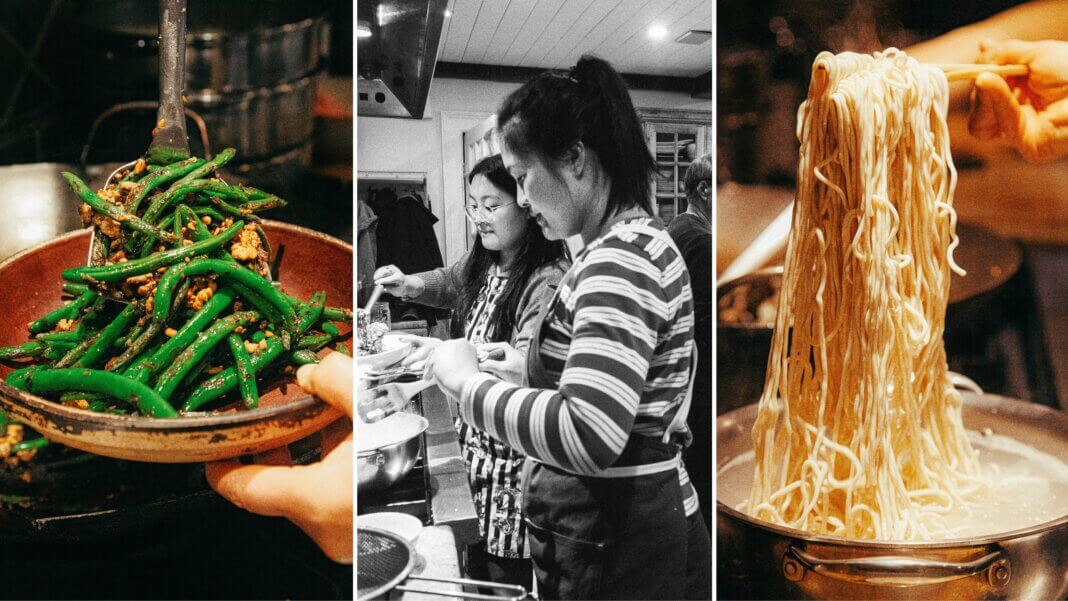 Bill grew up in the borscht belt of the Catskills, in Liberty, New York, and worked at his family’s Chinese restaurant. On the blog, he is the family’s expert in American Chinese take-out dishes, such as chicken chop suey, and Cantonese cuisine, including the iconic steamed fish with ginger and scallions. He’s worked as a software engineer and has experience in construction, and with his unplaceable New York–New Jersey accent, seems like the type of guy who knows a little about most things. Or in many cases, a lot about most things. “I’m gonna tell you the real story, Kat,” he says conspiratorially at one point in our conversation. In a “fanatic” fervor, he created the blog’s ingredients glossary, cementing his role as its expert in technical cooking skills. In his enthusiasm, he didn’t pause to copyedit the glossary and, he shares with a self-deprecating laugh, “for three, four years, we actually got comments like, ‘We can’t believe your grammar and spelling is so bad.”

The Leungs continued cultivating a unique identity, scoring a Saveur Blog Award in 2015. Around Lunar New Year of 2016, they noticed a spike in traffic—ostensibly from people searching for what to cook for the new year—with more than a million page views per month for the first time. These days, the blog receives 7 million monthly page views, and the Leungs churn out a smoothly produced newsletter rounding up their dumpling recipes, their most-used cooking resources, and how to grow and use garlic chives.

The Leungs and I talk about how sometimes, passing down stories and knowledge can feel like a game of assimilationist telephone.

The sisters credit the multigenerational aspect for their success. “Something I make, they have input in it. They’re like, ‘Mmm, this is good, it’s a good start, but maybe try this,’” Sarah says. Having four different perspectives on every recipe demands high quality. Judy is the type of precise woman, for instance, who takes joy in every meal. “A little bit of effort, and you can eat so much better,” she insists. Don’t take shortcuts. “You really shouldn’t do that, because your meals are limited.”

Recipe testing is not complete until the family can agree as a whole that the dish is done. “It’s a team,” Sarah says. “And that team happens to be your family, and everybody really cares—like really, really cares—and is very picky.”

Loyal fans—some of whom are of Chinese descent and many of whom are not—are drawn to the recipes because of their straightforward and detailed descriptions. Michelle King, a historian and an associate professor at the University of North Carolina, Chapel Hill, who cooks The Woks of Life recipes frequently with her children, appreciates the blog’s close guidance. “You can kind of immediately see, ‘What is this technique?’”

The Woks of Life’s collection of recipes for zongzi, for instance, breaks down how to make the notoriously time-intensive dish, which many families (mine, at least) would prefer to buy instead of making themselves. On the blog, Judy details how to soak, snip, and shape bamboo leaves. “You must use kitchen shears to cut away at least half an inch off the bottom of every leaf” to prevent the leaf stem puncturing while wrapping, Judy writes in the post, which is accompanied by a whopping 21 photos that demonstrate how to wind the leaves around sticky rice stuffed with boiled peanuts, hunks of salted duck egg yolks, and fatty pieces of pork belly and lap cheong.

Kevin Lo, a Cantonese reader who first came across The Woks of Life in the summer of 2018, says he was looking up zongzi recipes in honor of his late grandfather, who insisted the Shanghainese version of zongzi was the best. “The Woks of Life was the first place I saw that addressed the difference between Cantonese and Shanghainese zongzi (dark soy sauce, for instance),” Lo writes in an email. “I was hooked.”

When it comes to Chinese home cooking in America, the culinary lineage is scant. King’s scholarly work focuses on Chinese cuisine and cookbooks, including the English-language recipes by the Taiwanese icon Fu Pei-mei, whose volumes of Chinese Cook Book my father considers the Bible of Chinese cooking. Fu Pei-mei’s recipes are sparse with details, which can make following them difficult, King says, though Fu had her own TV program that made her work more accessible. The Woks of Life’s approach—recipes accompanied by the occasional video, such as their take on beef with broccoli—mirrors this multi-platform method. (King’s comparison between Fu Pei-mei and the Leungs’ recipes is not lost on me; a friend and I often refer to The Woks of Life’s blog as “the Bible.”)

There’s a sweetness in seeing how far Chinese home cooking in America has come—and how chefs like Chen have made a path for families like the Leungs.

King also has a copy of the chef and restaurateur Joyce Chen’s cookbook from 1962, simply named Joyce Chen Cookbook. Starting in 1966, Chen hosted a television show on Boston’s PBS station, which producers hoped would follow in the footsteps of Julia Child’s The French Chef, introducing American households to Chinese cuisine. Chen’s program lasted only 26 episodes, but she fashioned a career out of making Chinese cuisine accessible to non-Chinese cooks, which included creating a flat-bottomed wok that is still popular today.

Let me be clear when I say these gifts are for “coffee lovers.” There’s no need for fanaticism here; almost everyone can appreciate these...