How to Remove the Foamy Scum on Stocks and Soups 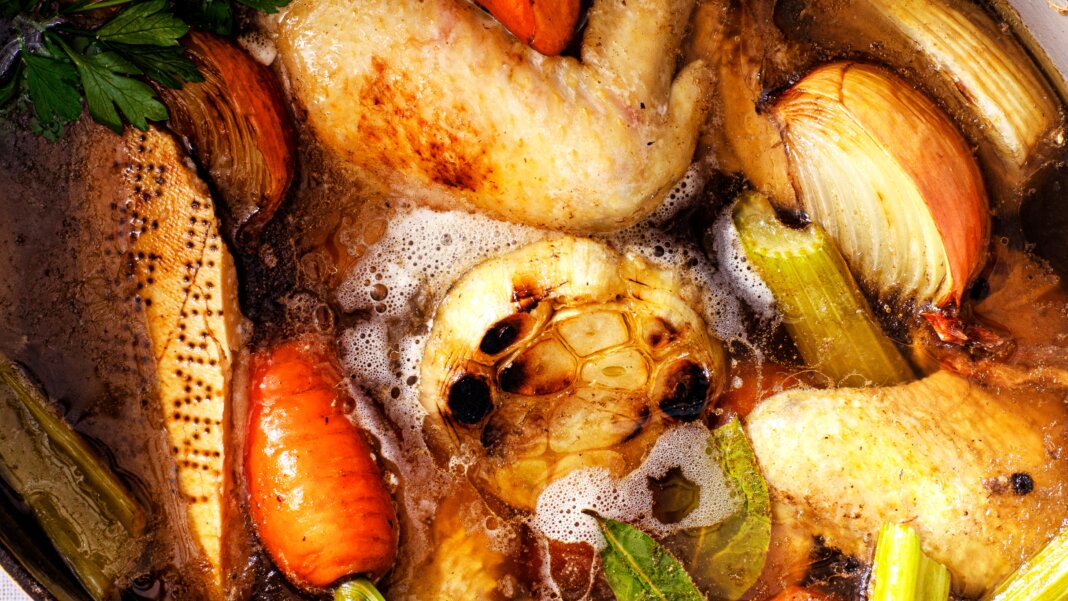 In Too Afraid to Ask, we’re answering all the food-related questions you’d rather not have loitering in the search history of your corporate laptop. This time: What’s the scum on top of homemade stock?

The first time I made chicken stock from scratch, I was shocked to discover a whirlpool of gray-ish foam bubbling on top. It looked like that make-a-volcano childhood science experiment gone wrong, and my immediate instinct was to throw the toxic-looking pot out my window. I calmed down after a quick Reddit trawl revealed that soup scum is normal—and common enough to warrant a number of animated threads.

Instructions on what to do about it have existed for over a century. “If any of the scum is allowed to stay in the soup it will give it a most disagreeable greenish tinge,” S. Beaty-Pownall wrote in the 1899 cookbook, Soups, adding that the proper color “should be exactly like a very pale light sherry.” In 1902, The Household Cook Book confirmed that assessment. “If you want clear stock, remove the scum when it rises thickly,” wrote the authors. Today, a quick poll of our test kitchen staff confirmed that this early soup wisdom still stands: Soup scum should be skimmed off and discarded.

What’s decidedly less clear: What is this frothy stuff made of? Is it harmful to eat, or is its disposal all about visual appeal? While scum is an inevitable part of any scratch-made soup journey, it (like most things) can also be explained by science. Here’s what you need to know.

What is that scummy stuff?

Impurities that form on the surface of some stocks and soups are rogue proteins which coagulate when heated, says Rosemary Trout, a culinary and food science professor at Drexel University in Philadelphia. That means the foam will typically appear when making meat-based broths and, to a lesser degree, soups made from high-protein vegetables such as chickpeas and lentils. When those coagulated proteins cluster together, they can create air pockets, which is what causes the “sudsy bubbles,” says Trout.

Does boiling or simmering make a difference to the scum?

Hotter temperatures will cause proteins to coagulate faster. “The boiling action is turbulent, so it also mixes these impurities throughout the soup, making them harder to skim off,” says Trout. Heat isn’t the only variable here either: A change in acidity from, say, adding a big squeeze of lemon juice to your simmering broth, might also promote coagulation.

Is it safe to eat?

“Rest assured that the foam isn’t harmful, despite it looking like something awful at the beach that you want to avoid,” says Andrea Nguyen, author of The Pho Cookbook and the forthcoming Ever-Green Vietnamese. That doesn’t mean you’ll want to eat it, though. “The scum will eventually break down into small pieces and cloud your stock,” says Mona Talbott, the co-owner and executive chef of Talbott & Arding Cheese and Provisions in Hudson, New York, which serves cups of housemade bouillon all winter long. For a broth that’s not only clearer, but also cleaner-tasting, skim those coagulated proteins off the top.

How do you remove scum from a broth?

Trout recommends starting with cold water before bringing stock to a boil. Slow, gradual heating allows time for proteins to aggregate, “making them much easier to spot and skim off,” she says. Once a broth is boiling and scum is visible, quickly lower it to a simmer to prevent the impurities being incorporated back into the stock or beans. Then, as Nguyen suggests, use a fine-mesh skimming tool to remove the foamy bits. Go around the edge of the pot with the skimmer, letting the scum settle into the mesh bowl before tossing it out, says Talbott. When she’s finished making a broth, Nguyen lets it cool before straining once more through muslin or cheesecloth.

Another simple way to quickly clarify a stock: Stir beaten egg whites into your simmering broth. They’ll bind with other coagulated particles and rise to the surface like a raft, which is easily skimmed off, says Trout. “But that’s not always a practical solution if you have lots of other tasty ingredients in your soup,” such as beans and vegetables, which will potentially get caught in the egg raft.

Is there any way to prevent scum from forming?

When making stock or broth for “old-school pho,” Nguyen parboils any meat and bones, then rinses them before cooking again. “That process may seem weird but it efficiently gets rid of impurities and you get clear broth” with virtually no skimming necessary, she says. Likewise, Talbot notices very little scum if she roasts her stock bones in the oven first.

Another option is to use a pressure cooker. These broths come out “crystal clear,” says Nguyen, because all of the impurities end up at the bottom of the pot. Let your stock cool before straining it through a muslin or cheesecloth to separate.