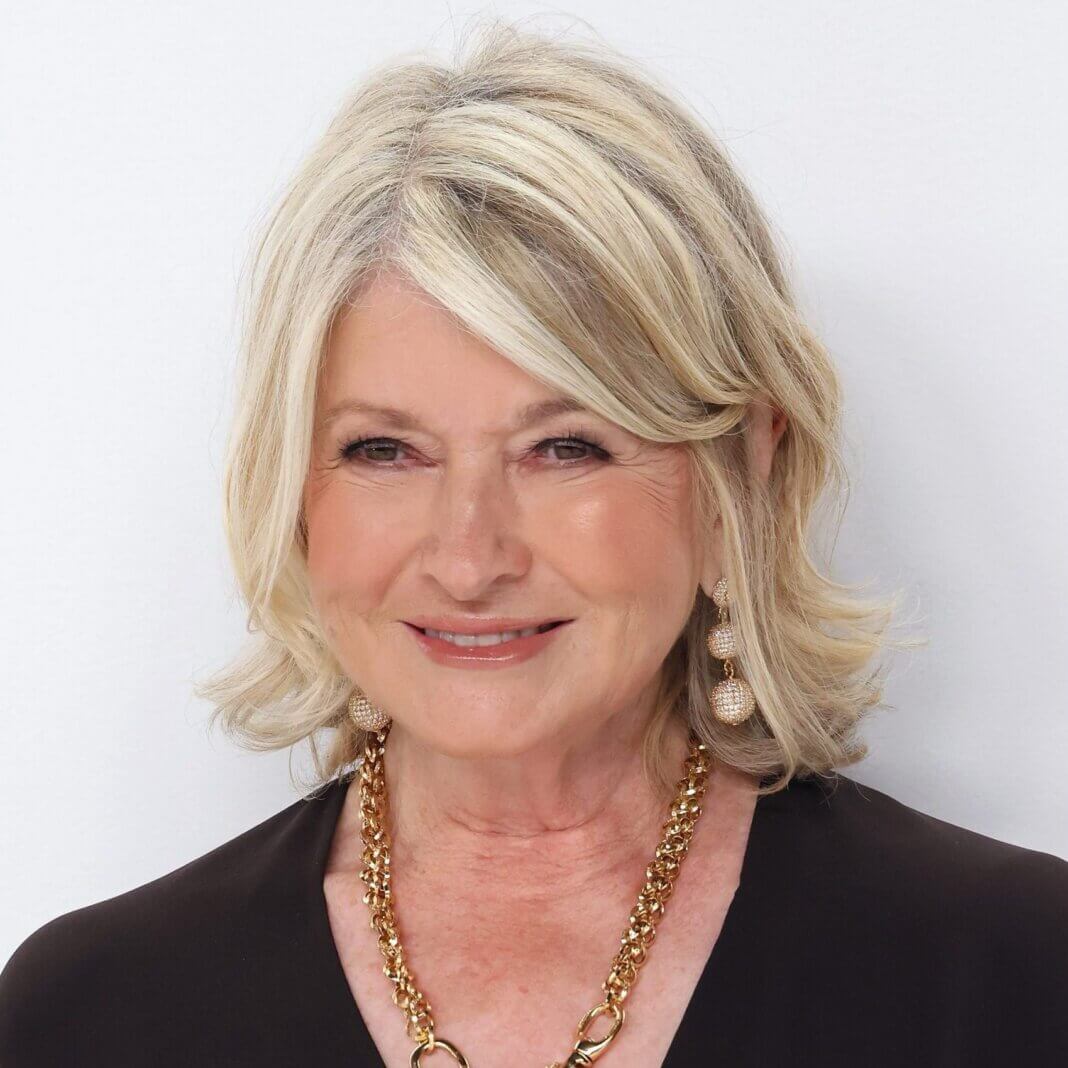 This Thanksgiving cocktail is sure to set the mood for the holiday festivities.

What better way to celebrate the holidays than with a Thanksgiving cocktail? Flavorful, refreshing and a little boozy, these fall drinks embrace the mood and flavors of the season. That’s why were were so excited to hear about Martha Stewart’s latest cocktail creation: a seasonal twist on a classic whiskey sour.

8 oz. bourbon (swap the bourbon for orange juice if you want a mocktail) 16 oz. apple cider Juice of one lemon Optional: Brown sugar for rim

Step 1: Grab a pitcher and your favorite bourbon

The Thanksgiving cocktail recipe starts with a pitcher filled with 8 ounces of bourbon. Martha’s favorite is Michter’s Kentucky Straight Bourbon, but use whatever you love and have on hand.

After adding the bourbon and apple cider to the pitcher, Martha grabs a citrus juicer to squeeze in the juice of one lemon. Then she stirs well to combine all her ingredients.

Tip: If you want it really cold, you can shake it with ice instead of stirring but remove the ice before serving so you don’t have a watered-down drink.

Martha makes the drink festive by dipping the rim in lemon juice and then rolling the rim in brown sugar for a holiday-ready garnish. It’s sweet and adds a little appreciated flare to your holiday bar cart.

Tip: Not sure about the sugar? Rim half of the glass to let your guests decide whether they like the sweetness or not.

How to Make It Your Own

This Thanksgiving cocktail is fun because it’s a very versatile drink that you can customize and make your own. While Martha makes hers using a Kentucky bourbon, a favorite whiskey of any sort could work, including a rye, which would also be delightful.Adding cinnamon stick to each serving is another easy garnish idea that adds fall flavor into the mix.

Take your nightcap to the next level with this chocolate-caramel rum coffee! Yield: 8 servings

Warm two 12oz. cans of evaporated milk, 3/4 cup of rum, 1/2 cup of chocolate syrup, 1/2 cup of caramel sundae syrup and 1/4 cup of packed brown sugar in a large saucepan. Make sure it doesn’t boil. Once the mixture is hot, turn the burner off and stir in 4 cups of hot brewed coffee and 2 tablespoons of coffee liqueur. Pour the coffee cocktail into your favorite mugs, top with a dollop of fresh whipped cream and a sprinkle of espresso powder.

Give the amaretto sour a fall twist with this apple cider version. Yield: 6 servings

Fill 6 highball glasses with ice and add 2 tablespoons of amaretto to each. In a separate container, combine 4 cups of chilled apple cider and 1/4 cup lemon juice, then divide it evenly between the glasses. Top with a lemon slice and cinnamon stick, then serve to your 5 closest pals. If you love amaretto,you have to try these 8 other amaretto-based cocktails.

Get your fall party going with this warm and boozy punch from Sebastien Derbomez, a Hendrick’s Gin Brand Ambassador. Yield: 6-8 servings

To a large pot, add a bottle dry white wine, ¾ cup of brewed chamomile tea, half of a peeled, cored and chopped pineapple, 9.5 tablespoons of sugar, 7 cloves (or to taste), 2 cinnamon sticks 4 orange peels and a teaspoon of white pepper. Let the mixture simmer for about 15 minutes, cut the heat and stir in 1.25 cups of Hendrick’s gin. Fish out the spices, ladle the cocktail into punch glasses and let the celebration begin!

Boil 4 cups of milk with a cup of sugar, 3 cinnamon sticks and 3 cloves in a large saucepan; reduce the heat, cover the pan and let the milk simmer for about 5 minutes. Take the milk off the burner and allow it to cool slightly. Remove the cinnamon sticks and cloves. Stir in 2 cups of strongly brewed coffee, 2 teaspoons of vanilla extract and 1 1/2 cups of pisco, aguardiente, grappa or brandy. Enjoy this Chilean specialty warm in a mug or cold over ice.

You can still enjoy a light and bubbly cocktail in the cold months, thanks to this vanilla bean fizz. Yield: 8 servings

Muddle 4 mint leaves in a cocktail mixing glass, then add 1.5 ounces of Four Roses bourbon, an ounce of Pedro Ximenez sherry and half an ounce each of lemon juice and simple syrup. Stir until the cocktail has chilled, then strain into a rocks glass with ice and garnish with an apple slice and cube of dry ice for some extra spookiness.

Let’s be honest: Everything is better with chocolate, even a martini. Yield: 1 serving

You don’t have to shake up a complicated cocktail to get a taste of fall. Tim Herlihy, of Tullamore D.E.W., suggests this easy fall drink. Yield: 1 serving

Stir 2 ounces of Larceny Bourbon with half an ounce of pear syrup, 2 dashes of cardamom bitters and ice until chilled. Strain the cocktail into a rocks glass with ice and garnish with a lemon peel.

Warm your bones with something a little spicy. Yield: 1 serving

Make your next s’mores a bit more adult with this cocktail from Travis Sanders of Pennyroyal. Yield: 1 serving

Infuse a bottle of bourbon by adding 8 crushed graham crackers and let it sit overnight. Strain the bourbon first through a mesh strainer, then a coffee filter to get rid of any solid bits. Pour 2 ounces of your infused bourbon in a rocks glass and stir in .25 oz of creme de cacao, 2 dashes of angostura bitters and an ice cube. Top with a toasted marshmallow or ghost-shaped Peep.

While Saint Patrick’s Day is still months away, there’s no reason not to make this easy Irish cream. Yield: 5 cups

Add 2 cups of half-and-half cream, 13.4 ounces of sweetened condensed milk, 1 1/4 cups of Irish whiskey, 1/4 cup of chocolate syrup, 2 tablespoons of instant coffee granules and 2 teaspoons of vanilla extract to a blender and pulse until blended. Enjoy over ice or in coffee for an after-dinner drink pick-me-up.

Cozy up next to a fire with a good book, sugar cookies and this warming cocktail from Belvedere. Yield: 1 serving

Muddle a few grapefruit chunks with .75 ounces of lemon juice and .75 ounces of simple syrup in a shaker. Pour in 1.5 ounces of Belvedere, 2 dashes of ground cinnamon, 2 dashes of angostura bitters and ice. Cover and shake the cocktail until condensation forms on the shaker, about 15 seconds. Strain into a rocks glass with ice and top with a grapefruit slice and cinnamon stick.

Want to feel like The Dude but not in the mood for something creamy? We have the answer: A black Russian. Yield: 1 serving

Pour an ounce of vodka and an ounce of Kahlua in a rocks glass with a few ice cubes. It’s easy, satisfying and oh-so-smooth.

It doesn’t have to be summer to enjoy a glass of sangria. Thiscranberry-orange sangriais packed with fall flavor. Yield: 10 servings

Pour a bottle of zinfandel wine into a large pitcher with 32 ounces of cranberry juice, a cup of simple syrup, 1/2 cup of orange liqueur, 1/2 cup of fresh or frozen cranberries, a thinly sliced apple and thinly sliced orange. Cover the pitcher and let the flavors develop overnight in the fridge. When you’re ready for a libation, drop a few ice cubes in a wine glass, fill it with sangria and garnish with additional oranges, apples and cranberries, if desired.

Let me be clear when I say these gifts are for “coffee lovers.” There’s no need for fanaticism here; almost everyone can appreciate these...
Food

Don’t know what to do with all those potato peels? Running out of room in your oven for stuffing? Gravy tasting a little flat?...