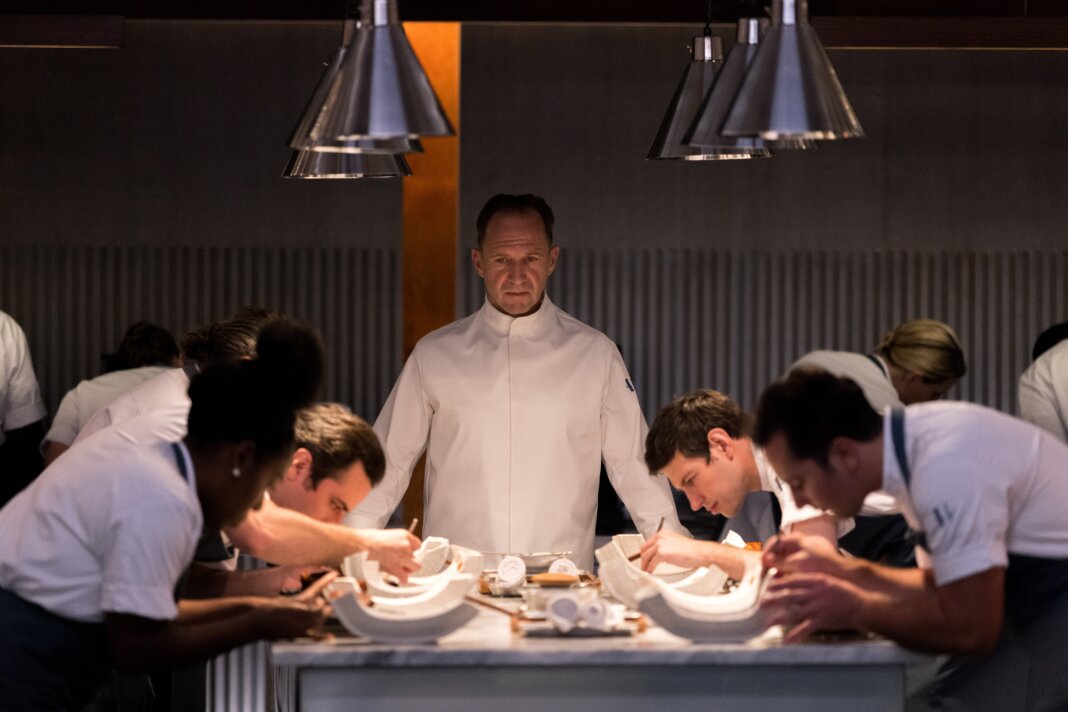 We’re being bad customers. The Menu screenwriters Will Tracy and Seth Reiss and I are still not ready to order on the server’s second go-round. We’re at New York’s Huertas, a tapas restaurant in the East Village and an apt setting for a conversation about how two comedy writers got so much right about what’s wrong with food culture. The duo’s new film The Menu—a horror-comedy taking place over the course of a tasting menu directed by Mark Mylod—spends much of its run skewering the very things food media loves to talk about: high-concept dishes, tiny overpriced portions, and diners moaning over bites of mignonette.

The Menu follows one dinner at Hawthorn, a highly exclusive restaurant located on a private island and run by the enigmatic Chef Julian Slowik, played by Ralph Fiennes. Slowik is one of the world’s most famous chefs, the kind who would say his food is his art. But a career spent satisfying crowds of diners—crowds in constant search of new flavors, new textures, new… newness—has left him embittered. Only a few courses into the night, Slowik reveals his plan to kill everyone at the restaurant at the meal’s end. Trapped on the island with him and his henchmen, the guests have little choice but to eat.

It’s no secret that food workers have a unique relationship with their clientele—a dynamic you’ll understand if you’ve worked in hospitality. In my time in service, we’d joke (in great detail) about wanting to murder the rude, entitled members of the country club before putting on our widest smiles to not fuck with our tips. The chef Dominique Crenn, who consulted on the food in the film, empathizes with Slowik in her own way. “I’m not as crazy as he is, but I understand his way of thinking,” she said to me during an earlier Zoom call.

But as resentful as my fellow service staff and I were of the customer, we also needed them to survive. “It’s a symbiotic relationship,” says Reiss. “[Slowik] needs them watching, financing the operation.”

Tracy says the film was inspired by a real-life meal. At an island restaurant much like The Menu’s Hawthorn off the coast of Norway (“Not Fäviken, but like Fäviken,” Tracy is quick to point out), he recalls feeling intense claustrophobia. “There’s something relentless about all of these tasting menus,” he says. “You can’t leave. You’re being held hostage by a story which they’re telling for hours.”

Still, The Menu is mostly a satire, and a successful one at that. Both Tracy and Reiss wrote for The Onion, with Tracy going on to write for HBO’s Succession and Reiss spending six years on Late Night With Seth Meyers. They say that part of what made their dynamic work on The Menu was their differing opinions on food. “I, with great shame,” Tracy says, “would definitely identify as a foodie.” He cooks at home, buys fancy appliances, and plans vacations around eating. Reiss, on the other hand, is not one, although he’s quick to acknowledge the artfulness of top tier restaurants (“The food is good”).