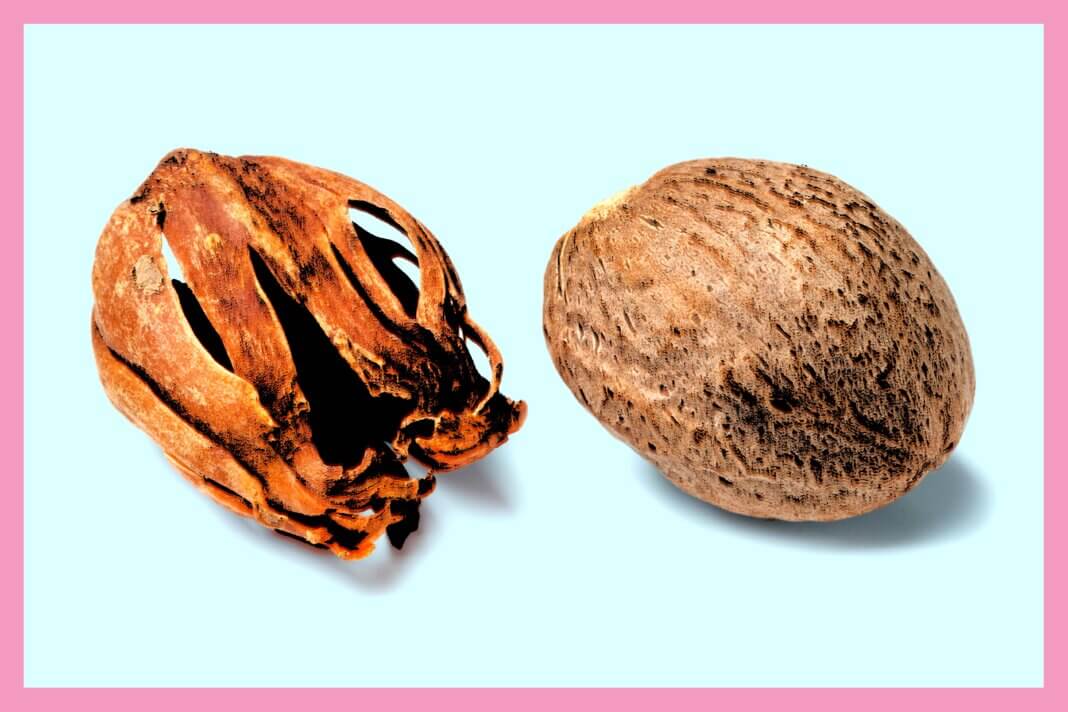 Don’t know what to do with all those potato peels? Running out of room in your oven for stuffing? Gravy tasting a little flat? Head to our holiday hub, How to Thanksgiving Smarter, Not Harder, for everything you need to know—and nothing you don’t—to make this year’s holiday easier, speedier, and tastier.

Nutmeg is precious—literally. At one point, access to nutmeg and its warm, spicy aroma was as valuable as Manhattan real estate (or more accurately, the whole island of Manhattan—more on that later). Centuries later, it’s one of the hero ingredients in pumpkin spice. Along with its close relative mace, nutmeg appears in plenty of delicious autumn bakes, soups, stews, sauces, and so much more. Here’s how to use nutmeg and mace to their full potential, from buying to using to storing.

Money may not grow on trees, but nutmeg does. More specifically, nutmeg is the seed inside the fruit of nutmeg trees (an evergreen tree with the scientific name Myristica fragrans), which are indigenous to Indonesia but are now grown in tropical climates around the world. Diaspora Co. sources their sweet and complex nutmeg from Anamalai, India, while Burlap & Barrel offers nutmeg from both Grenada and Zanzibar.

While any variety will work in a recipe calling for the spice, nutmegs grown in different regions feature complexities in flavor unique to the climates where they’re grown. Like with store-bought sauces or salsas, we recommend trying a new variety each time you restock, so you can find the flavors that work best in your cooking.

Nutmeg was a treasured resource in the colonial-era spice trade. Dutch and English merchants with competing interests in the Maluku islands, then known as the Spice Islands—where nutmeg originated—highly valued the spice (and the indigenous lands that cultivated it). So highly that, following a series of deadly attacks, the Dutch exchanged their colony of New Amsterdam—what is now New York City—for control of the Indonesian archipelago and its natural wealth.

What does nutmeg taste like and where do I use it?

Warming, with peppery-clove notes, nutmeg has a sweet, earthy aroma. Think of a hike in the woods after it rained, a tacky Christmas sweater in a vintage store, or sharing eggnog around a fireplace in thick flannel pajamas. There’s a reason it’s so beloved during the holiday season.

Nutmeg is recognizably one of the heavy hitters in pumpkin pie spice, along with cinnamon, cloves, and allspice, bolstering their complimentary sweetness and fragrance.

Nutmeg brings a welcome warmth and depth to all sorts of recipes (whether it’s a classic pumpkin pie, or a simple bechamel for a brunch-y Croque Monsieur). A sprinkle of freshly ground nutmeg is like hitting the cozy button on your cooking. Try it in mulled wine, spicy holiday cookies, refreshing rum punch, tender pumpkin bread, and on roasted fall vegetables like butternut squash and sweet potato.

While ground nutmeg is marginally more convenient, Frisch says you’re better off grating a whole nutmeg seed (also called the “nut”) with a Microplane or nutmeg grater than shaking its powder from a bottle. “Whole spices are always going to taste better,” he says. “Any spice that you’re buying at the supermarket is already old and stale.” It adds a step to any recipe, but it takes a minute if that, and you’ll get more bang for your buck in the long run with fresh nutmeg, since it’s so potent and you don’t have to use as much.

Let me be clear when I say these gifts are for “coffee lovers.” There’s no need for fanaticism here; almost everyone can appreciate these...