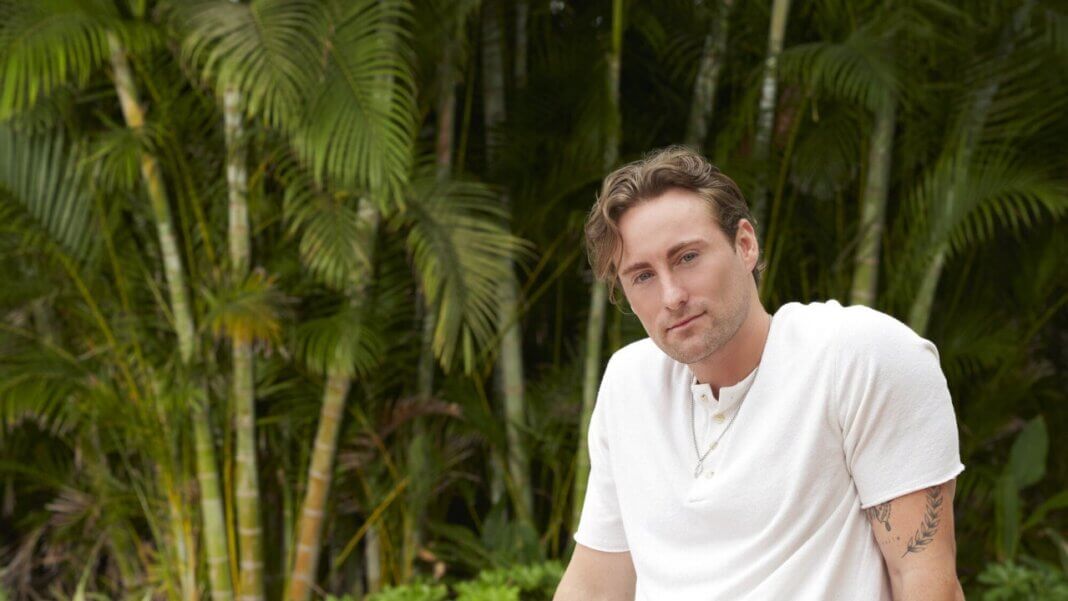 Bachelor in Paradise‘s wild ride isn’t slowing down anytime soon. On Monday’s episode of the dating series a family secret came out and several hearts were broken.

The episode picked up right where last week’s installment left off, with Eliza trying to win back Justin. The romantic gesture didn’t exactly go over as she’d hoped, though.

Back on the beach, a love triangle developed, Johnny got deep with Victoria, Kate and Logan continued to bicker and Andrew explored a new connection, much to Jessenia’s dismay.

Keep reading for a full recap of episode 13 of Bachelor in Paradise.

As everyone on the beach continued to cry over Rodney’s heartbreak, Eliza was hopeful that Justin would take her back. When she showed up at his door, though, Justin told the cameras it was like “seeing a ghost.”

“When you came to the beach, suddenly everything changed. The second you left something started to click for me,” Eliza told him. “I think I let all of the outside pressure and everyone’s opinions and what I felt like everyone wanted me to decide factor into my decision that night.”

“I was so stressed out, so confused. I don’t think I realized it until you were gone. I think that’s when I realized I made the wrong choice. I broke things off with Rodney the next morning,” she continued. “… In the end I finally went after what I wanted, and that’s you.”

Justin was left “speechless” by Eliza’s reveal, but after thanking her for coming and acknowledging the “hard position” she was in, he rejected her.

“I just want someone who is so sure about me… And that’s not what happened,” he said. “You chose Rodney. That s**t hurts… I was right there for you… Maybe it’s time I choose myself. I’m sorry. I know that’s not the answer you’re looking for.”

Eliza took it relatively well in front of Justin, but later said in a confessional, “I flew across the country for you and I’ve only known you for three days… This is me saying I’m sorry and showing you, so if that’s not enough that kind of tells me what I need to hear.”

Elsewhere, Mara from Clayton Echard’s season arrived on the beach with a date card. After less than stellar chats with Andrew, Logan and Johnny, Mara felt a connection with Justin, one of the twins. Mara eventually asked Justin on the date and he agreed.

Florence wasn’t pleased by Justin’s decision or Mara’s “sass,” but the new couple was unbothered as they turned each other into human churros on their date, even sharing a kiss.

Back on the beach, Florence was pouting over Justin ignoring her after his return. Eventually, she told him, “I don’t want to be an option. I want someone who is sure that they want to get to know me.”

“I’d rather pursue my connection with you than with Mara,” Justin told Florence, just as Mara interrupted their chat. Justin agreed to be pulled away from his conversation with Florence, but only to tell Mara that he felt “a greater connection” with the other woman. That reveal made Mara dub the young twin “wishy washy.”

Victoria and Johnny’s relationship continued its positive ascent on Monday, as Victoria gushed to the cameras, “He’s my person now and I can see him being my person forever.”

As the pair discussed their families, Johnny confided in Victoria that his older brother is in prison and his mom is not doing well.

“I think it tells a lot about someone who can say ‘I’m there for you,'” he continued. “Victoria’s slowly becoming that person… I’m becoming more open to the possibility of being engaged… It’s such a good feeling.”

Though Kate picked Logan over Hayden at the most recent rose ceremony — along with a warning to give her more — she wasn’t ready to let her controversial comments about their respective financial situations go.

“The biggest gap between Logan and I is our position in life. Logan is 26 years old, not established, drives an orange Honda, has a broken phone, he’s a dog walker,” she said in a confessional. “Meanwhile, I’m constantly someone who is wowing. I’m a wower. I want to be wowed.”

Logan, however, told Kate that he was “pretty hurt” by her rose ceremony comments.

“I’m really sorry if I made you feel like I was critiquing you, but I am also letting you know that the growth we had this past week was driven by me steering the ship, as I told you, and I don’t want it to be that way,” Kate responded.

Logan disagreed with her interpretation, but Kate was still hung up on the fact that Logan hadn’t discouraged her from going on a date with Hayden. Logan, however, pointed out that he shut down Mara’s interest in him without being asked, and that’s how he would’ve “loved for it to go” on Kate’s end as well. The pair ended their talk with a hug and a kiss, but with tensions still high.

“I want to be with Kate and I like her… but there’s still a lot of pent-up frustration between the two of us,” Logan told the cameras. “I’m afraid that any leftover resentment or feelings of anxiety are going to come back to haunt us.”

A new woman arriving did threaten the couple, as Lyndsey from Clayton’s season had her eye on Logan. Though Logan admitted that Lyndsey was someone he wanted to meet, he told her that he’d have to discuss a potential date with Kate, who’s one of Lyndsey’s good friends.

Kate felt “whiplash” by Logan’s desire to date someone else, telling him, “I’m confused that you’re even entertaining this… It makes me question if the things you said last night even mean anything to you.”

While Logan said that their conversation was meaningful, he told Kate, “It’s like you’re disappointed and critical and frustrated in me constantly… I feel like you look down on me.”

Kate said that after their “defining conversation” she didn’t want Logan to go on the date, and he reluctantly agreed.

“Logan is resentful about my date with Hayden. There’s just no way he’s not. That was literally eons ago. He didn’t say, ‘Don’t go.’ He expected me to read his mind because he’s a child and I can’t do that, so I took what he said at face value and I went because he told me, ‘I’m not going to tie you down,'” Kate told the cameras. “Name a moment when I was critical of you, other than asking you to do more for me.”

After Logan let Lyndsey down, she decided to leave the beach for good.

Ency, who also appeared on Clayton’s season, came onto the beach next, and quickly took an interest in Andrew, who admitted that the feelings were mutual.

Jessenia was disappointed when Andrew agreed to go on the date, but Andrew saw the experience as a potential fresh start.

“I think [Jessenia’s] a great, amazing girl, but I’m not sure we’re on the same page,” Andrew told the cameras. “Then Ency came down. Felt like a little bit of a kick to the heart. I was like, ‘Maybe there’s a little something left in here’… I think there could be something here.”

As Ency and Andrew made out in the pool, Jessenia complained to the other women about Andrew being “closed off and guarded.” When Andrew returned from his date, he decided to end things with Jessenia.

“You deserve a little bit more than what I’ve been able to give you,” Andrew said. “It’s nothing against you. It’s more so I needed to figure kind of something out.”

While the conversation ended with a hug, Jessenia left feeling “defeated,” and telling the cameras, “I really thought that I had a safe space with Andrew.”

At the end of the episode, Gabby Windey and Rachel Recchia arrived on the beach, causing great stress for Logan, Johnny and Tyler.

“Good god. I thought I left those relationships out at sea,” Logan, who flip flopped between the women on The Bachelorette, said. “… Now I’m dating Kate, who is best friends with both of them. Let’s see what happens when you put them all in a jar and shake it up.”

Johnny was worried the women “could mess this up” with Victoria, while Tyler admitted that he was “nervous” to see Rachel, his one-time love, again.

Tuesday’s episode will pick up right there, with Kate requesting “the tea” from Gabby and Rachel, making Logan fear “disaster” for him and his new girl. That worry may be justified, as Rachel tells Kate, “I don’t respect Logan. I don’t think Logan has changed.”

Elsewhere, Tyler gushes that Brittany is “exactly what I’ve been looking for,” as he tells her, “I want to leave here with you.” Brandon and Serene are excitedly looking ahead to an engagement, Aaron and Genevieve are inexplicably fighting about the difference between itching in pain, and Andrew, feeling “hope for love” with Ency, is going to have an emotional moment with Jessenia at a ’90s-themed dance put on by Thomas Jacobs and Becca Kufrin.

Season 8 of Bachelor in Paradise airs Mondays and Tuesdays on ABC.