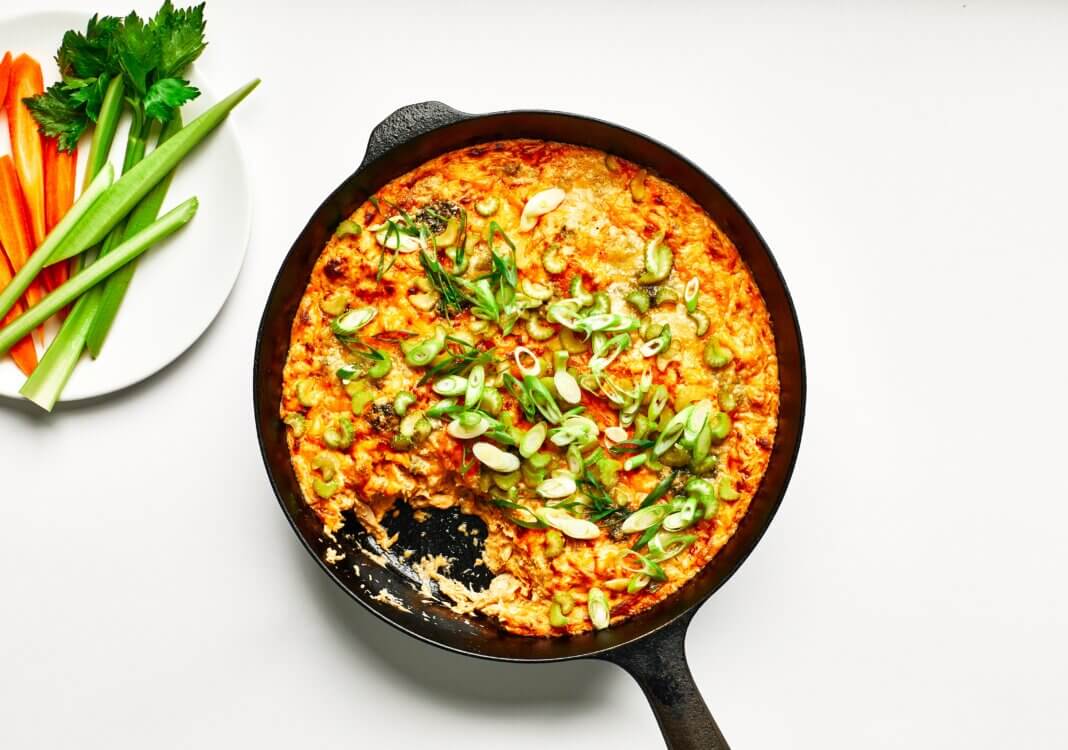 The only thing better than a good recipe? When something’s so easy to make that you don’t even need one. Welcome to , a column where we talk you through the process of making the dishes and drinks we can make with our eyes closed. This time, Buffalo chicken dip.

The first time I tasted Buffalo chicken dip was in upstate New York. It was over winter break, and a few of us were staying at a friend’s place, completely unaware that we’d be snowed in two days later. One night, my friend Michael’s sister, Debbie, put down a square glass dish of suspiciously, delicious orange goo. “Buffalo chicken dip,” she casually announced, like she didn’t just recenter my world.

I had only recently been introduced to the carnal joy of 25-cent Buffalo wings at school, so I promptly lost my mind. Wings? But…but actually a dip? What was this magic and how could I have a constant supply forevermore?

Debbie taught me her ways and ever since, I’ve made my version of Buffalo chicken dip for every large gathering, in which it remains the most popular appetizer by far—the ultimate crowd-pleaser, always demolished first, with seconds requested loudly. Here’s the template I follow, plus a full Buffalo chicken dip recipe at the end if that’s more your speed.

She’s beauty, she’s convenience, she’s Miss Rotisserie Chicken—and she’s the best contender for this dip. Remove the skin (too chewy) and bones, then pull the chicken in large ropey shreds for maximum texture. Leftover grilled or poached chicken breasts and thighs, minimally seasoned, also work. Debbie used canned chicken in her dip, proving that it’s a worthwhile option too. In a rare instance, I’d warn against all dark meat—the slippery oiliness is too cloying combined with all the cheese; go for all light or a mix of light and dark. A pound of shredded meat is good for up to six people.

Buffalo anything requires hot sauce, and lots of it. (After all, classic Buffalo wing sauce is little more than hot sauce and melted butter.) Frank’s RedHot is good, Crystal is arguably better. Set the fancy stuff down—it would get lost in the shuffle, and you want the brash acidity and fruity heat of the classics. Start with ¼ cup if your crowd is heat-averse or go all the way up to 1 cup for a definitive bite.

A half pound of cream cheese provides a neutral background, anchoring the rest of the dip with its quiet opulence and silky heft. A lot of easy Buffalo chicken dip recipes call for bottled ranch dressing, but an 8-oz. container of sour cream spiked with a teaspoon each of garlic and onion powders is just as easy while offering more control over the final taste. Finely grated lemon zest is my unexpected but favorite addition—it adds a sparkle of vital freshness.

Many Buffalo chicken dip recipes lean hard on mozzarella, which is wonderfully gooey, but mild. Let’s up the ante. Shards of blue cheese add a piquant edge to the dip. Use anywhere between 2–4 oz. of a mild, creamy blue like Gorgonzola or Point Reyes Bay Blue, and keep it in large chunks so it doesn’t muddy the flavor of the dip. (On that note, avoid blue cheese dressing, which varies vastly by brand, and blue cheese crumbles, which can be chalky in texture.) Then a cup or two of shredded cheese keeps things ooey-gooey without being overwhelming: Mild cheddar cheese melts nicely, but sharp is my go-to for its nutty-tangy vibe. (Skip the ultra sharp cheddar cheese, which breaks into oily pools under the heat.)

A little garnish goes a long way. The green oniony sharpness from a final flourish of scallions (or chives, should you have some) cuts through the cheese nicely. And in a move directly copped from Ottolenghi’s book, , I’ve taken to strewing thinly sliced celery, soaked in lemon juice, on top of my chicken dip for an additional pop of tartness.

Serve it hot or cold.

Come game day, a Super Bowl party, or, you know, just Thursday night: Build your dip in a skillet and broil it until bubbling, or simply stir everything together in a large bowl if you’d like to keep it cold. If you want to make it ahead of time, you can keep it in an airtight container in the fridge for up to three days, then serve chilled or pop it in a baking dish and reheat.

Can you make this in a Crockpot or slow cooker? Technically, yes. But it won’t save you any prep time, and it’ll rob you of the opportunity to broil the dip at the end, which, to me, is what sends it over the top. Stovetop is best here.

Let me be clear when I say these gifts are for “coffee lovers.” There’s no need for fanaticism here; almost everyone can appreciate these...
Food

Don’t know what to do with all those potato peels? Running out of room in your oven for stuffing? Gravy tasting a little flat?...