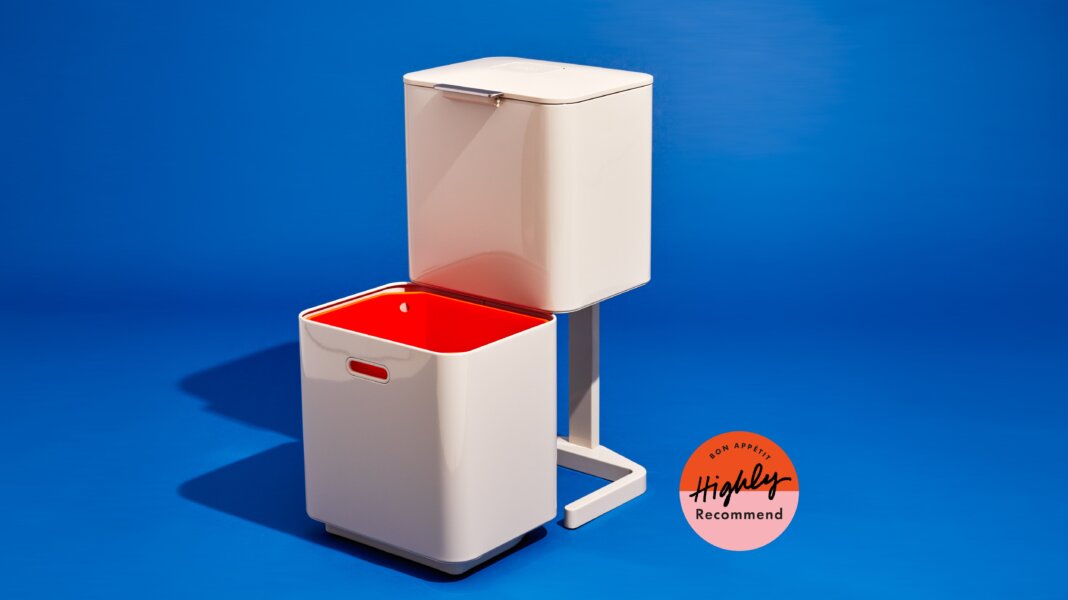 This is Highly Recommend, a column dedicated to what food people are eating, drinking, and buying right now. Here, Serena Dai writes about the Joseph Joseph trash can that’s maximized her kitchen space.

I could name about a dozen things about my life that would be better if my kitchen were more spacious, but the biggest one involves trash. When your home is small, the receptacles that hold waste end up taking up a large percentage of the space, and that is… not chic. I had a bin for recyclable plastic and metals and a pile of junk mail and cardboard packaging. Compost needed its own thing, as did actual “trash” that couldn’t go anywhere else.

I had no expectation that my kitchen look social media-ready, but the various piles of garbage were becoming chaotic and unsightly with borderline depression vibes. Then this Joseph Joseph trash can plus recycling bin one day graced my social media feed. It was like a lightbulb that gently murmured, “Oh honey, why don’t you think you deserve to live in an organized space?”

The internet has a slew of trash can-recycling bin combos, but most of them are extra-wide, as if you took a huge suburban trash can and then doubled it. That’s a no-go for my tiny kitchen. This Joseph Joseph, though, has roughly a 15” x 15” footprint, with the trash compartment on top and one for recycling on the bottom. The bottom compartment slides out easily to house empty seltzer cans, while the top has a button to launch the lid up for trash. That same lid also has a filter intended to mitigate odors. Though it’s smaller than my old bins, that’s fine by me; if anything, my old set-up was too big. And with modern rounded edges and a small pop of orange, it looks sharp without feeling like the centerpiece of the room the way a bigger can might.

There are a couple things I wish were different. I miss being able to use my foot to open the trash can lid. And the company provides an additional basket to hang in the top portion for compost, but it’s so small that I continue to put my compost elsewhere.

Still, these points are not deal-breakers. After getting my Joseph Joseph trash can, I have no more over-spilling bags of recycling in the corner, and no more last-minute scrambles to hide my shame from guests. Every day, I feel more at ease while maneuvering around my kitchen, and I thank that lightbulb moment. I do deserve nice things.

The only thing better than a good recipe? When something's so easy that you don't even need one. Welcome to It's That Simple, a...